Situated as it is in the grounds of Compton House, St Swithun’s may (at first sight) appear to be a private chapel. However, it is not and all are warmly welcome to enjoy the prayerful peace of its interior. We have two regular 9am services each month - Holy Communion on the first Sunday and Matins on the third Sunday, both using the Book of Common Prayer. Other services include our Patronal festival in July, Remembrance Sunday and a candle-light celebration of Nine Lessons and Carols at Christmas. St Swithun's has a long-standing connection with St. Stephen's House in Oxford and students come to celebrate Mass according to the English Missal once a year.

St. Swithun's Church is considered by its worshippers and many visitors to be the jewel in the Benefice crown. Certainly, it appears both in Simon Jenkins’ 'Thousand Best Churches' and Richard Wheeler's 'Oxfordshire's Best Churches.' Even the 14th-century bell merits four pages in the Church Bells of Berkshire!

Built of chalk and clunch, this 13th century cruciform church is unusual in that most of the internal furnishings date from the 20th century. These were commissioned by Samuel Gurney, an Anglo-Catholic who lived in Compton Beauchamp from 1924 until his death in 1968. He employed the artist Martin Travers to redesign the interior, which was completely reordered between 1925 and 1950, creating a beautiful, sacred space within the tiny building.

The church itself is surrounded by beautiful countryside and by its very positioning encourages a feeling of stillness, contemplative thinking and an engagement with nature. It sits below the ancient Ridgeway track and is on the Diocesan Pilgrim Route. 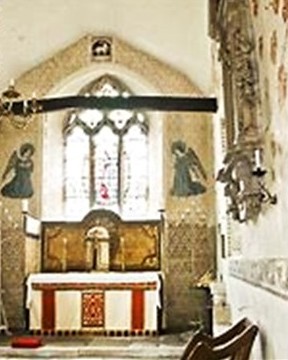